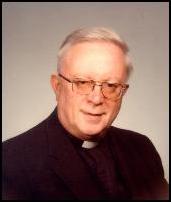 Rev. Frederick Wm. Figge, 82, of Keokuk, also affectionately known as Father Fred or Padre by those who knew and loved him, died Friday, September 13, 2002 at 6:50 A.M. at Keokuk Area Hospital in Keokuk, Iowa.

Rev. Frederick William Figge was born on August 3, 1920 in Muskegon, Michigan, the son of Frederick E. and Margaret Ozinga Figge. He married Muriel Carpenter on August 22, 1942. She survives. He earned his Bachelor of Arts Degree from Albion College in Albion, Michigan. He then attended Bexley Seminary in Iowa City and graduated in 1945. His first parish was Salem Lutheran in Pemberville, Ohio where he served from 1945 to 1953. While there he also worked on his Masters Degree at Ohio State and received his degree in 1953. In 1954 he was ordained a Deacon in the Episcopal Church and in 1955, a Priest. From 1953 to 1956 he was a Chaplain and professor at DeVeaux School, Niagara Falls, as well as a Curate at St. Peter's Church. From 1956 to 1957 he served as a Curate in St. Paul's Church, Syracuse, New York. In 1957 he became Rector in St. Peter's, Westfield, New York. In 1960 he moved to Illinois serving as Vicar of St. Cyprians in Carthage, until 1963, as well as Rector of St. Paul's in Warsaw, from 1960 to 1968.

In 1963 he became a part-time teacher at Southeastern Community College, then in 1968 to 1983. While in Warsaw he was the Editor of "LIGHT" monthly paper of the Diocese of Quincy. In 1968 he moved to Keokuk and served as intern in Burlington, Ft. Madison and Keokuk at various times as well as serving other denominations.

He was well known for his strong speaking voice, his singing, and for his sermons, which were always from the heart and mind, and never written down. He had the use of seven different languages. He loved his family and delighted in his grandchildren and great-grandchildren. He was a member of B.P.O. Elks, Lodge #106.

He was preceded in death by his parents; two brothers, Don and Ernest Figge; and a daughter-in-law, Karen Sue Figge.

Memorials may be made to the St. John's Altar Guild.

I was looking for my father's obituary and ran across this one, which I had hoped wouldn't have needed to be written yet. It's been since 2002, but as I've just seen this, I do send my sympathy, and I hope everyone is doing well. I have thought of you often over the years.

The services for Rev. Frederick have not yet been added. Please sign up below to be notified when the services are ready.

Get Notified When a Service is Added

The attached photos are added to the memorial of Rev. Frederick Figge to help share their legacy.

Thank you for sharing your memory of Rev. Frederick

Help friends and acquaintances of Rev. Frederick leave memories by sharing to Facebook

Learn about pet loss grief, the "tasks" of mourning, valuable tools and more.