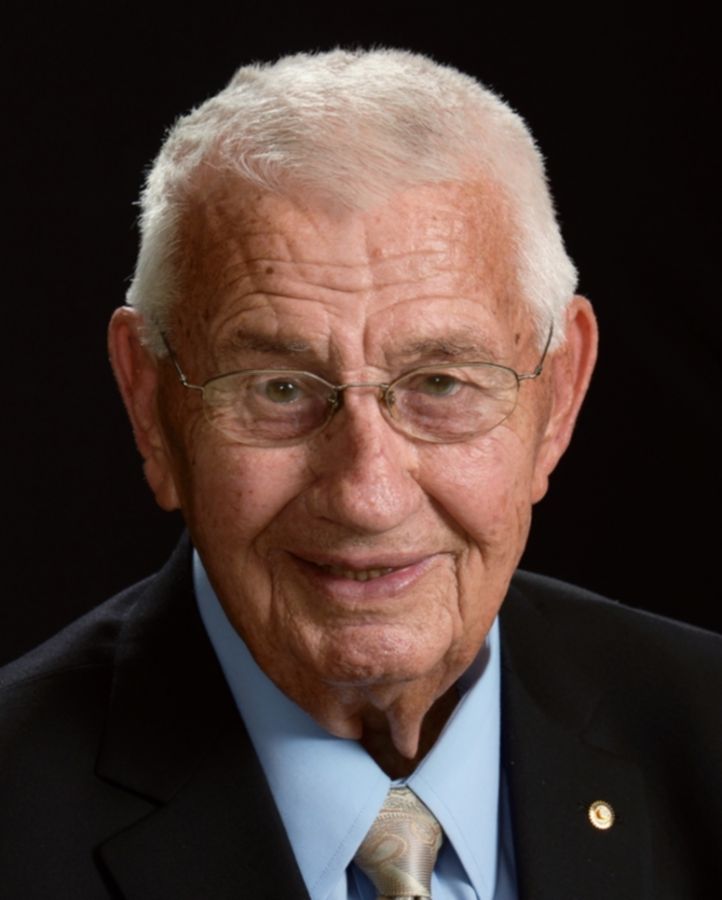 Robert Schieffer, 93, of Keokuk, passed away at 3:05 am Thursday, February 13, 2020, at Montrose Health Center in Montrose, Iowa.
Bob was born February 9, 1927, in Burlington, Iowa, and graduated from Burlington High School in 1945. Immediately following graduation, Bob joined the Army and was stationed in Germany. He obtained the rank of Staff Sargent in the Third Army Headquarters under General Patton.
On August 27, 1949, he married Elizabeth (Libby) Knobbs at St. Mary's Catholic Church in West Burlington, Iowa. She preceded him in death on May 21, 2017.
He was employed by Northwestern Bell Telephone Company in Burlington and was transferred as manager of the Keokuk facility. Bob retired from U.S. West in 1990 after forty years of service.
Bob was a member of All Saints Catholic Church. He served as president of each of the following boards: Rotary Club, St. Joseph Hospital, and Keokuk Convention and Tourism Board. He was also a member of Knights of Columbus, The American Legion, Chamber of Commerce, Keokuk Sports Boosters, and Keokuk Area Community Foundation.
In 1994 Bob received the Marilyn Pohorsky Award in recognition of the many volunteer hours spent in support of the Pea Ridge Reenactment. In 1996 he was awarded the Spirit of Keokuk Award. Bob enjoyed playing an active role as a Keokuk citizen and lived up to Rotary's motto: "Service above self".
Bob and his wife raised eight children. Surviving are Mark (Pam) Schieffer of Carthage, Illinois; Deborah (Boyd) Kaiser of Cedar Rapids, Iowa; Kathy (Frank) Kelley of Nederland, Colorado; Daniel Schieffer of Keokuk, Iowa; James Schieffer of Des Moines, Iowa; Julie (Mark) Rector of Keokuk, Iowa; Matthew (Melody) Schieffer of DePere, Wisconsin. Bob was preceded in death by a daughter, Cheryl Spicer.
Also surviving are son-in-law John Spicer of Keokuk, Iowa, and sister-in-law June (Robert) Randolph of Hillsboro, California. Bob was blessed with an abundance of grandchildren and great-grandchildren that he adored.
Visitation services will be held Monday, February 17, 2020, after 3 pm. There will be a Christian vigil at 4 pm and family will greet friends, family and loved ones from 4 pm to 7 pm at DeJong-Greaves Celebration of Life Centers, 1212 Concert, Keokuk.
Services will be Tuesday, February 18, 2020, at 10:30 am at the All Saints Catholic Church, 310 South 9th Street, Keokuk with Reverend David Brownfield, PhD officiating. Robert will be laid to rest at Keokuk National Cemetery with full military rites.
Memorials in honor of Robert Schieffer may be made to Keokuk Catholic Schools, Keokuk Area Community Foundation, or donor's choice.

2 people have supported the family by purchasing them flowers or gifts from the Healing Registry.

I am Roberts third grandson and my last memory of this man whom I loved and trusted for all of my life is when, after his wife, my sweet grandmother passed, he tried molesting his own great grand-daughter (my niece) in her early teens by touching her vagina. When she reported it to her mother, her mother reported it to our mom, Bob’s daughter. She then confronted her sisters and their advice was to sweep it under the rug and let the man live out his last years in peace. So the picture of him with the Bible back ground says a lot. Do not trust anyone! And please do not feel remorse because this man was never punished while he was here. But thank you Lord Jesus for You are a just God and my anger only comes from having a loving relationship with a man I thought was awesome who in the end turned out to be a monster and just as messed up as people in or out of jail for crimes they committed. But Bob in the end was a child molester of his own blood. I have a recording of him telling me how he would love to watch her put on make-up and how he thought she was such a beautiful girl. And the victim has mentioned how in the past he would ask her to sleep with him in his bed. and any of you who ignore his last actions are child molester supporters and ignorant and no longer my family or respectable human beings. John Spicer, Kathy Kelley, Julie Rector, Dan Schieffer, and whoever has brought him meals and gave him your support during his last days after you knew what happened and decided not to believe a young girl. Share your grave next to his and label your headstone: “We support Child Molesters if they are family”

I was so sorry to hear about Bob passing. My sympathies to his entire family. He was such a nice man. Now he and Libby are together again!

I'm very sorry to hear of your loss... my prayers and thoughts go out to the Schieffer Family at this time
.. I can still Remember Bob coming to our home to fix our phone or to put a new one in
...he was always a nice person and to not forget Matt his son I went to school with From 3rd grade at St.Vincents school and Cardinal Stritch...God Bless.....

I'm thinking of the Schieffer family in your time of sorrow.

Leland and I are so sorry for your loss. Bob was a great guy and will be missed

So sorry for your loss. Our thoughts & prayers are with you and your family at this time. Bruce & Corrina Wells

So sorry to hear of your dads passing, Mark. I will be praying for you and your family!🙏🙏

*Due to time restrictions, delivery to service is unavailable.

The attached photos are added to the memorial of Robert Henry Schieffer to help share their legacy.

You will receive a notification text whenever there's an update to this obituary.

Thank you for sharing your memory of Robert